We're running out of time to spotlight all the donations that we're received, but hope that the ones we have shared with you will indicate the wide variety and crazy cool nature of what will be auctioned off during Worldcon 76!

If you've been following the convention's development for the last two years (longer if you count prior to winning the bid) you'll recall that one of our mascots and inspirations has been the historic San Jose Electric Light Tower. Worldcon 76 Chair Kevin Roche has used his crafting and electronics skills to build not only a 1/10th scale model of the tower with modern electronics, but created several table sized tower replicas out of clear plastic and computer-controlled LEDs.

And one of them is going to be in the auction! 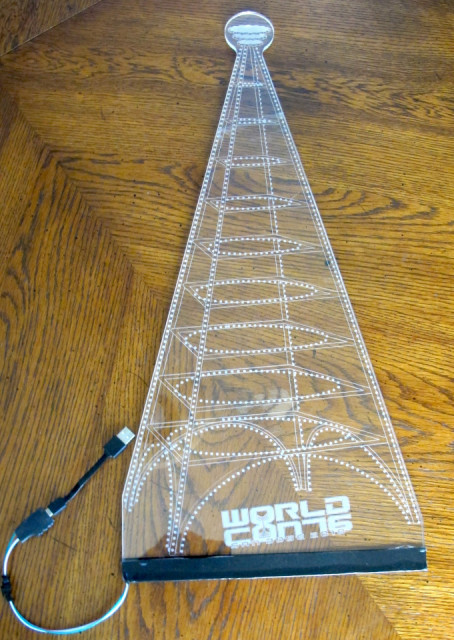 This photo doesn't do the image justice, as it's not lit up.  The black bar at the bottom has sequenced LEDs that rotate the plastic through an array of colors when plugged into a USB power supply.  Very cool, and easy to power with either a computer or a USB power adaptor or battery. When lit, the etched (white lines and dots) pick up the color from the base and the whole thing looks quite splendid.

In addition, Kevin donated a proto-tower that is uncut and still attached to backing the backing paper the plastic comes with. 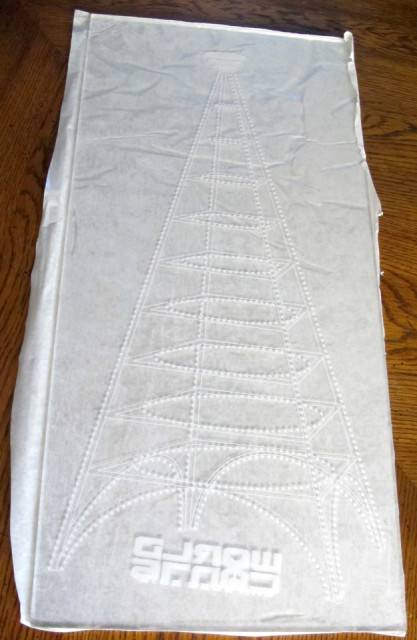 Again, visit the Silent Auction Exhibit and get your bids in early on this extremely limited run of Worldcon 76 history!