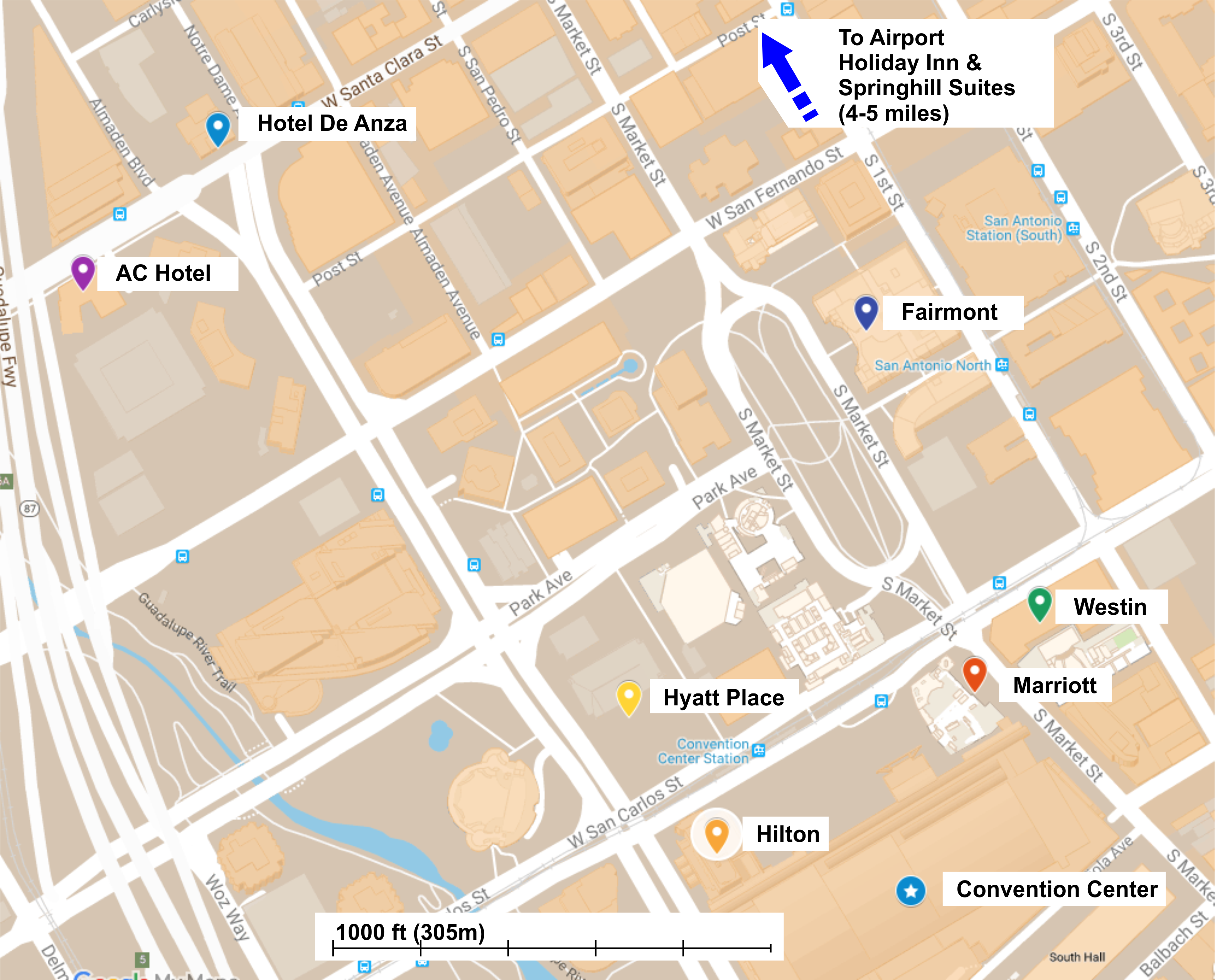 At present, we have no rooms available on Friday, August 17, in any of our contracted hotels. We do have rooms available for all other nights in most of our downtown hotels, but none has rooms available for all nights.  We also have some hotels two miles north, near the airport. Some of these are all at much lower rates than the downtown hotels.
Team San Jose (TSJ) maintains a waitlist for people who desire to change hotels. As people cancel reservations, TSJ works down the list to backfill those requests. If you desire, you may contact TSJ at This email address is being protected from spambots. You need JavaScript enabled to view it. to request being placed on a waitlist. Placement on the waitlist is no guarantee that you will be accommodated, and you should plan accordingly.
When you make a new reservation or wish to modify an existing reservation using the Passkey system, please note any special request in the comment box. Examples of special requests to note in the comment box include but are not limited to referencing accessibility needs, extra pillows, or a request that you not be placed on a party floor [Fairmont only].  You may also note your special request by emailing TSJ. Be sure to include your reservation information.

Passkey transfers all reservations to the hotels on July 9. After that date, you must contact the hotels directly to modify or cancel an existing reservation.

Room reservations are made via Passkey linked from our convention registration system; all registered members (supporting and attending) are sent a link to the reservation page in their confirmation email.

The Passkey reservations page may be accessed via this link: https://aws.passkey.com/event/49491857/owner/4304/home

Use the "Attendee" option to enter the system, no access code is required.
We strongly recommend using the "List All" option for a quick overview of available rooms:

Questions? email This email address is being protected from spambots. You need JavaScript enabled to view it.
We also have an interactive Google map showing the properties via this link: https://drive.google.com/open?id=1eFdm7qjK5Cba-hXAWIJwJdW4wP4&usp=sharing

Suite reservation procedures are detailed on the Suites page. Want to host a party? Preliminary host information is there, too.

Why Book in one of our contracted hotels?

Our contracted hotels are partner hotels in Team San Jose, the public-private partnership that runs convention facilities here, including the McEnery Convention Center. By booking inside of our room block, you help Worldcon 76 meet its contractual obligations with TSJ and reduce our cost of renting the Convention Center. In addition, all our partner hotels rebate $15/room night back to Worldcon 76. Those rebate funds will also be used towards our expenses at McEnery. Thus, by booking rooms in one of our contract hotels, you help us pay for our venue two different ways!

Hotels with rooms still available in our block

The Party hotel will be the Fairmont, about 800 feet (244m) from the Marriott and the convention center entrance. It has enough suites and larger rooms to support the usual Worldcon evening social life. Our main block has rooms from August 14 (Tuesday) through August 20 (Monday). Our peak room commitment at the Fairmont is 450 rooms for Friday, Saturday, and Sunday (this does not include suites). Some additinal shoulder nights are available.
Standard rooms are $199 Single-Double/$224 Triple/$249 Quad Occupancy. Deluxe (larger) rooms are $239 Single-Double/$264 Triple/$289 Quad occupancy. Fairmont one-bedroom suites (bedroom plus a standard parlor) are $339. Note that suite reservations for parties will be administered by Worldcon 76.

The AC Hotel is about 5 blocks (3200 feet, just over a kilometer) away from the Convention Center.  Rooms are $179 Single-Double, $199 Triple, or $219 Quad occupancy. Our block has rooms from August 15 (Wednesday) through August 20 (Monday)We have a peak room commitment of 100 rooms for Friday, Saturday, and Sunday.

The Hotel De Anza is also 4-5 blocks (3200 feet, just over a kilometer) away from the Convention Center.  Rooms are $198. Our block only has rooms for Thursday through Sunday nights. The De Anza is a 4-diamond boutique hotel, modernized while preserving its unique architecture. Significant for its architectural style, it is one of San Jose's few “Zigzag Moderne” Art Deco buildings. The interior of the De Anza is distinguished by its main lobby where Art Deco elements are integrated into a predominantly Spanish Colonial Revival decorative scheme.

Our block includes rooms for Wednesday through Monday nights.

Our block includes rooms for Thursday through Sunday nights.

These hotels have sold out our blocks. There may be limited rooms available at market rates, or isolated nights for part of the convention period.

SJ in 2018’s headquarters hotel will not be familiar to 2002 Worldcon attendees, as it opened in 2003. The San Jose Marriott is the newest hotel connected to McEnery Convention Center. Since opening, it’s been the headquarters hotel for Further Confusion (2012-present) and hosted the 2014 SFWA Nebula Awards Weekend. Spacious rooms with beautiful views of the hills surrounding San Jose are the norm at the Marriott. While there are plenty of other places downtown to eat and drink, the Marriot’s TANQ bar and Arcadia Steakhouse are both fabulous.

The Marriott has a total of 478 rooms including 10 suites, 248 king rooms, and 201 double rooms.  Accessibility is excellent.
Our main block has rooms from August 14 (Tuesday) through August 20 (Monday), with peak room commitment of 340 rooms for Friday, Saturday and Sunday. Some additional shoulder nights are available. Note that suite reservations will be administered by Worldcon 76.

Note: the Hilton has some isolated rooms still available on August 11th, 12th, 14th, 19th and 21st. It does not have contiguous nights available for the entire convention period.

At the west end of the convention center, the Hilton San Jose is conveniently located for convention events and nightlife. The Hilton San Jose hosted the 2013 SFWA Nebula Awards Weekend, and is also a host hotel for Further Confusion. Triple rooms will $169 and Quad $189.

The Hilton San Jose has 353 rooms, including 17 suites, 117 king rooms and 294 double queen rooms. All king rooms are ADA compliant, and the hotel does have rooms with additional accommodations for hearing and mobility needs, including roll-in showers. Our main block has rooms from August 14 (Tuesday) through August 20 (Monday), with peak room commitment of 247 rooms for Friday, Saturday and Sunday. Some additional shoulder nights are available. Note that suite reservations will be administered by Worldcon 76.

The Hyatt Place San Jose is directly across the street (north) from the Convention Center. It features a free breakfast buffet. Rooms are $189 Single-Double, $209 Triple, or $229 Quad occupancy. Our main block has rooms from August 14 (Tuesday) through August 20 (Monday), with peak room commitment of 150 rooms for Friday, Saturday, and Sunday. Some additional shoulder nights are available

The Sainte Claire Hotel (aka Westin San Jose) -- starting at $179

Currently a Westin, but still sporting the historic Sainte Claire blade sign, this historic property is directly across the street (east) from the Marriott end of the Convention Center. Rooms are $179 Single-Double, $189 Triple, or $199 Quad occupancy. Note that most rooms are single/double occupancy. Our block has rooms from August 15 (Wednesday) through August 20 (Monday). We have a peak room commitment of 90 rooms for Friday, Saturday, and Sunday.